So why, over 40 years later, does the media continue to portray sharks as monsters? We think it’s time that changed.

When the media describes sharks as monsters, killers, beasts, menacing, patrolling, lurking, razor-toothed, dead-eyed and mindless it only reinforces the Hollywood hype and slows conservation efforts. For that reason we launched our Media Guidelines for Reporting Shark Encounters attracting national and international press coverage. 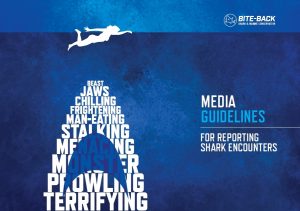 Given that as few as six people die every year from shark encounters, we think it’s time to set the record straight and invite journalists to balance their reporting and drop the villain label.

If you see an article in print or online, or watch a news item that uses monster-like language, use the contact page to let us know so we can work to educate the media.

"Our first battle is to convince the world of the wonder of sharks, to make people realise they’re as charismatic as dolphins and seals."
Steve Backshall

HOW YOU CAN HELP