Bite-Back’s campaign to make Britain’s restaurants shark fin free scored another victory this week when a Chinese restaurant in Teddington, Surrey, announced it had taken the controversial dish off its menu.

The Imperial China chose to remove shark fin soup from the menu to avoid ‘the ongoing pressure from Bite-Back and customers telling us that it’s not okay to serve it’.

As a result the restaurant has become the latest establishment to be dropped from Bite-Back’s ‘shark sighting map’ of restaurants serving shark fin soup in Britain.

Campaign director at Bite-Back, Graham Buckingham, said: “Restaurants that sell shark fin soup are endorsing the extinction of shark populations around the world. With every bowl of shark fin soup they sell they are condoning the brutal and wasteful practice of shark finning at sea. The news that the Imperial China has stopped serving shark fin soup moves us closer than ever to our goal of making Britain the first country in the world to ban the unacceptable dish.” 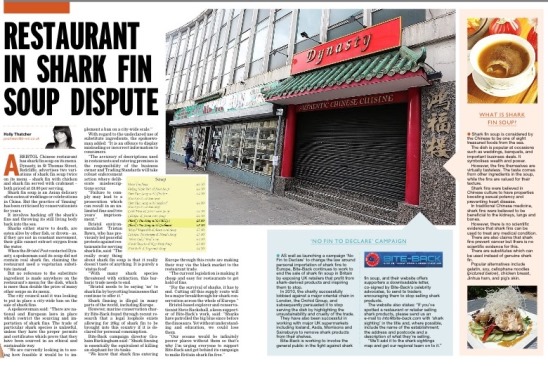 Earlier this year Bite-Back worked with the Bristol Post newspaper and contributed to a front page expose of The Dynasty restaurant and its inclusion of shark fin soup on the menu. Within 24 hours the restaurant decided to remove the item off its menu.

Readers who see shark fin soup for sale are encouraged to let Bite-Back know via the contact page.